A weak front will pass the area tonight and bring a chance for a few light showers (you can see the clouds approaching on the satellite loop below). The best chance for a light shower will be from 9 PM to 7 AM tonight and rain totals will be 0.1" or less. Snow levels will remain high, so no snow is expected in local mountains.

Another weak system will pass the area on Monday and bring another chance for a few showers. Snow levels will again remain high, though there should be accumulations in the San Jacinto and San Bernardino mountains.

I've attached the computer projected rain and snow totals on the maps below.

The long term weather pattern is still generally dry for at the least next couple weeks, though an occasional shower could pop up from time to time. I'll bring more updates if I see a bigger pattern change, but for now it isn't looking to great for substantial rainfall. 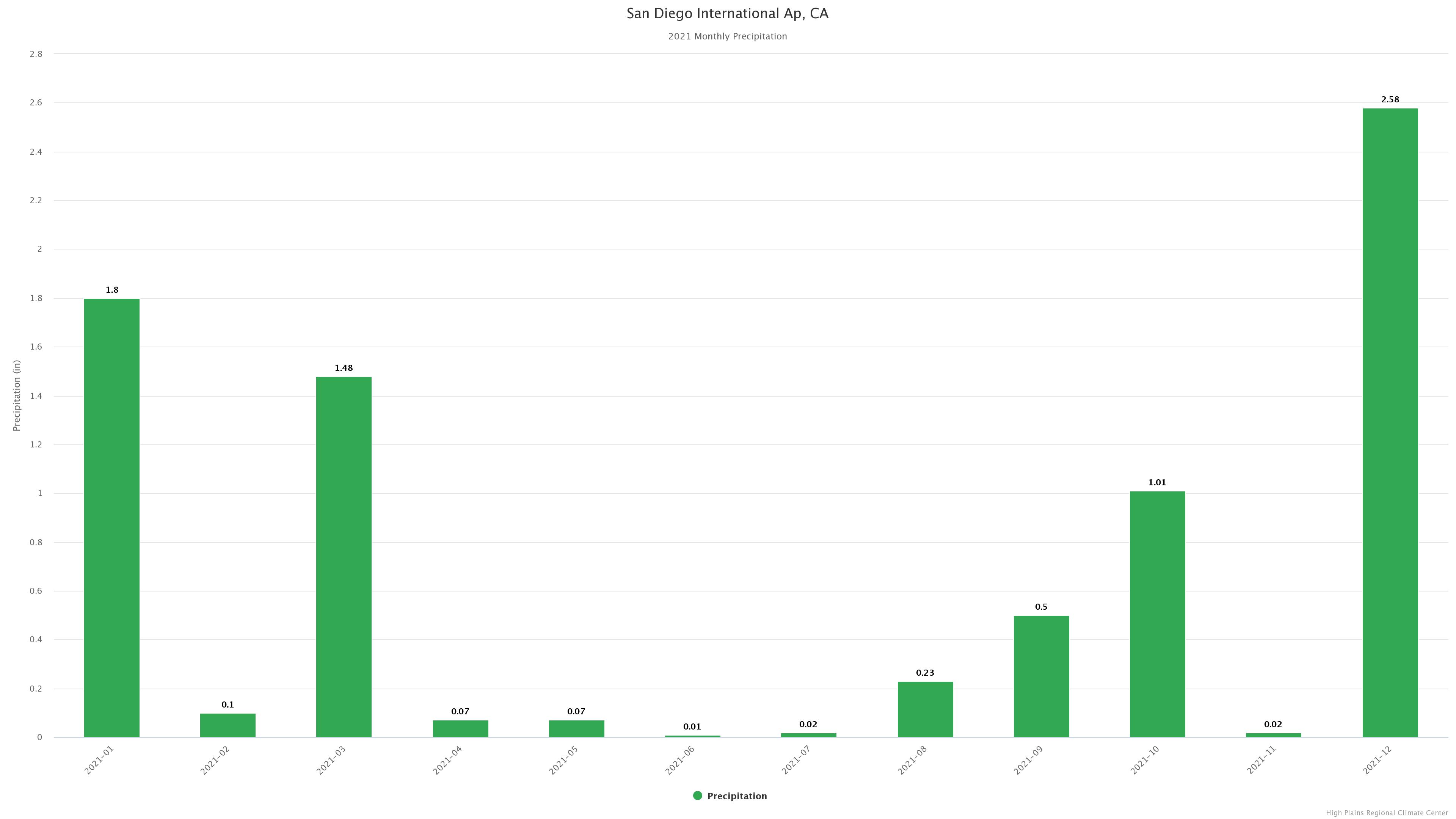 Here are the rain totals by month (click to enlarge). You can see that most of the rain came in January, March, October and December. 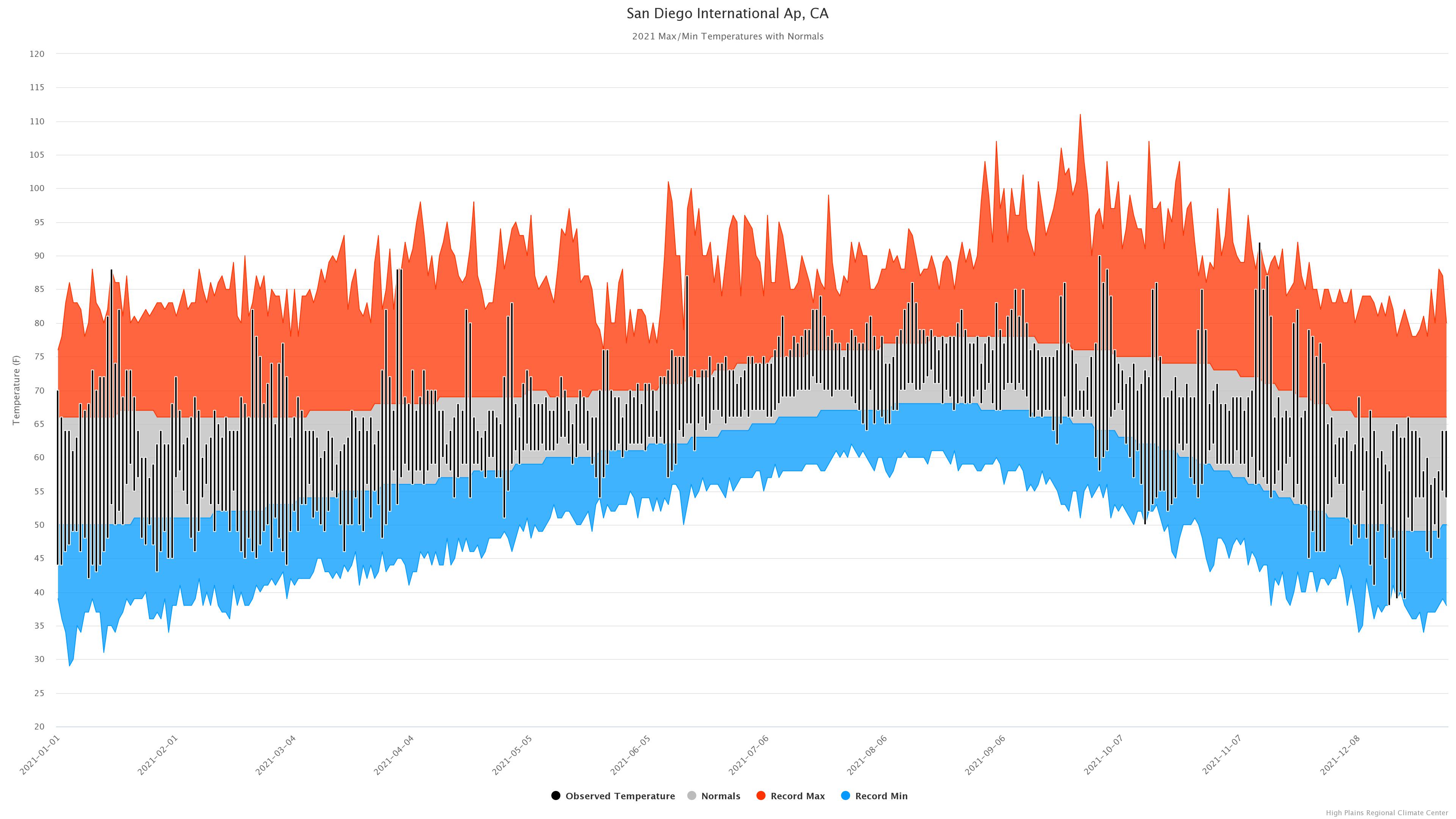 Here is a graph that plots temperatures through the year. The light gray shaded area represents normal temperatures. Generally, we stayed within the norm, though you can see some periods of warmth in January, February, July and November. Conversely, October and December had days that were cooler than normal. 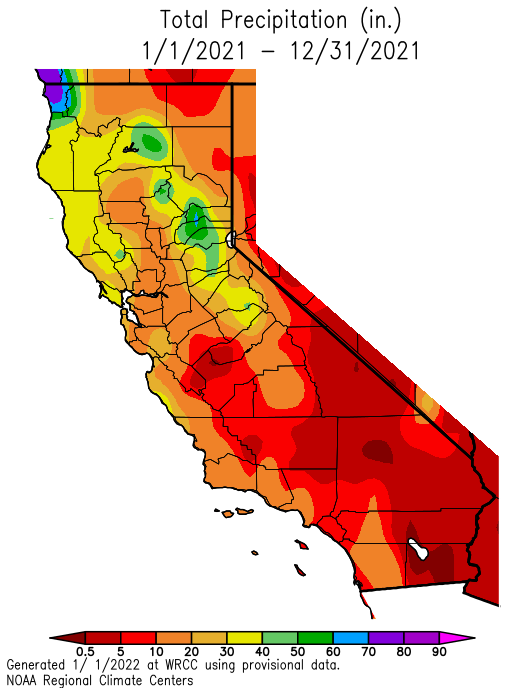 Here are the rain totals across California. 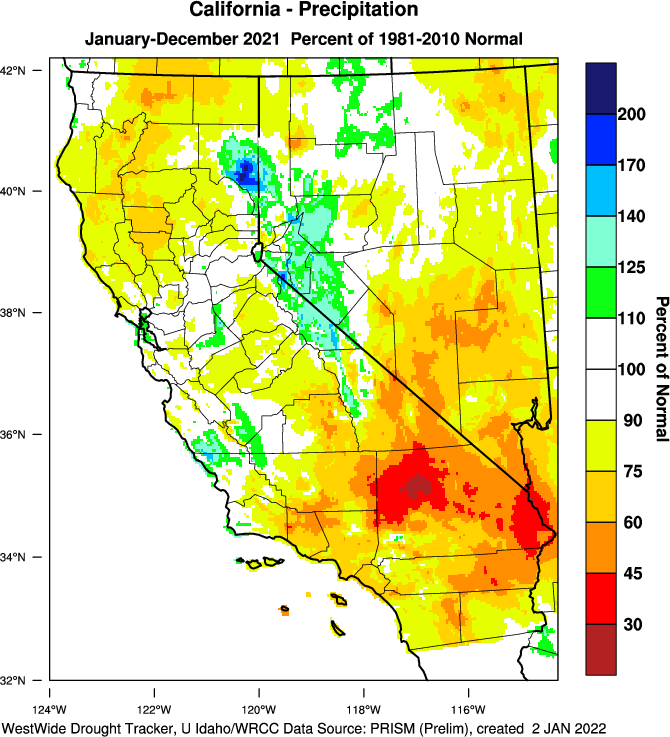 This map shows the percentage from normal for rainfall across California. This helps to highlight which areas were extraordinarily wet or dry. Most of the state was below normal, though the southern third of the state was the worst. There were some pockets of higher rainfall in Central California, especially into parts of the Sierra Nevada. Most of this rain came in December, otherwise, these areas were also dry. This map shows the ranking for rainfall, which shows that no records were broken. If we didn't receive all that rain in December, this map would look dramatically different. 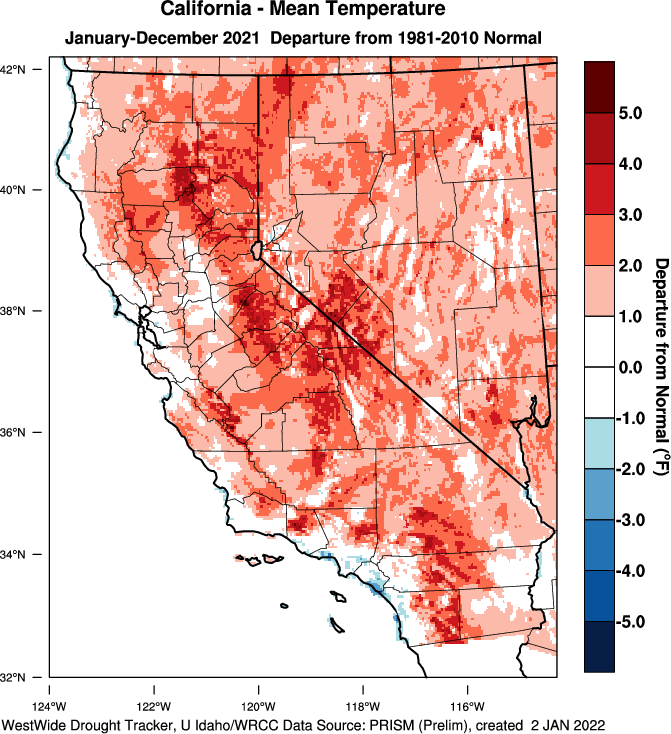 This map shows the temperature departure from normal across California. Although coastal San Diego County saw near normal temperatures, most of the state was significantly warmer than normal. 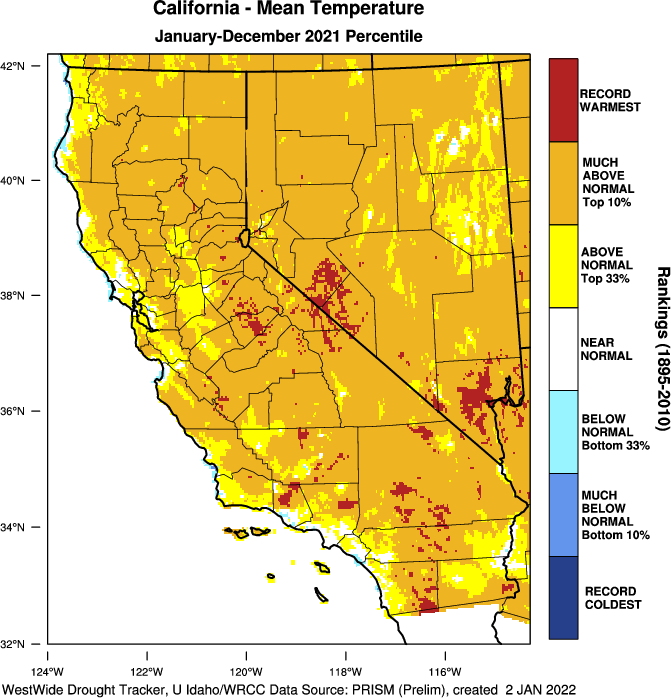 Here are the temperature rankings, which shows several areas across the state with record breaking heat. 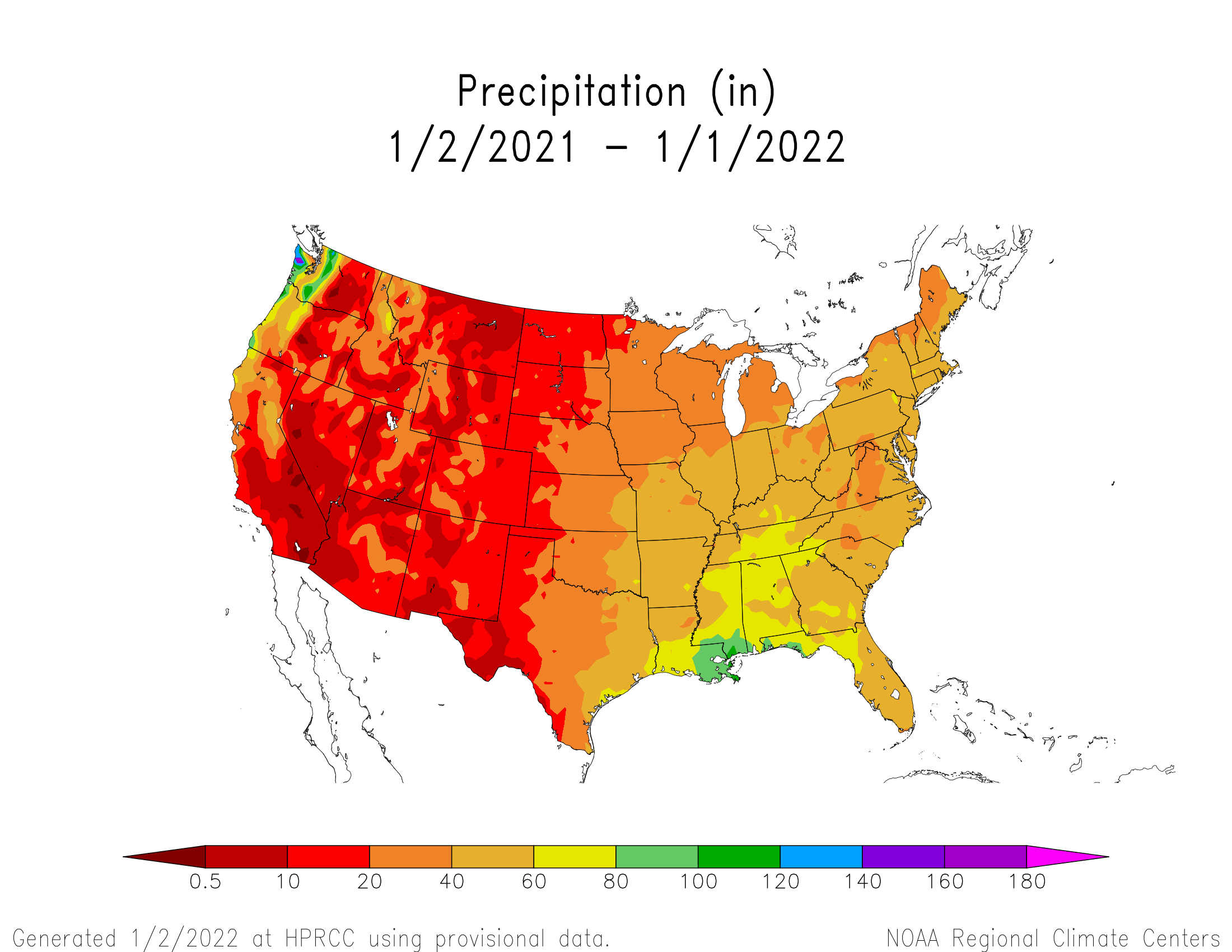 This map shows the rainfall across the United States in 2021. This shows the departure from normal rainfall in the United States. Most of the Western states were dry, while the Gulf Coast saw large amounts of rainfall due to an active hurricane season. 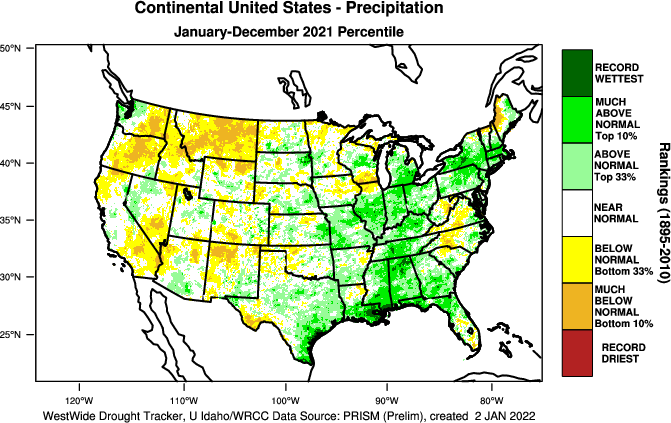 This map shows the percentage of normal rainfall. Some of the rain totals in the Southeast were record breaking. 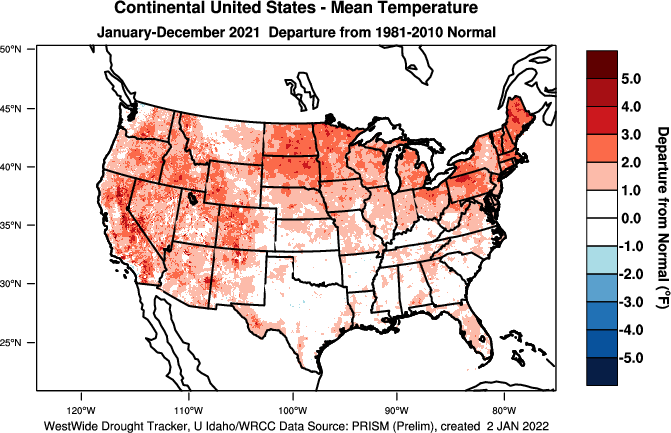 Here is a map of temperature departures from normal across the country. Generally, most areas were above average for the year. 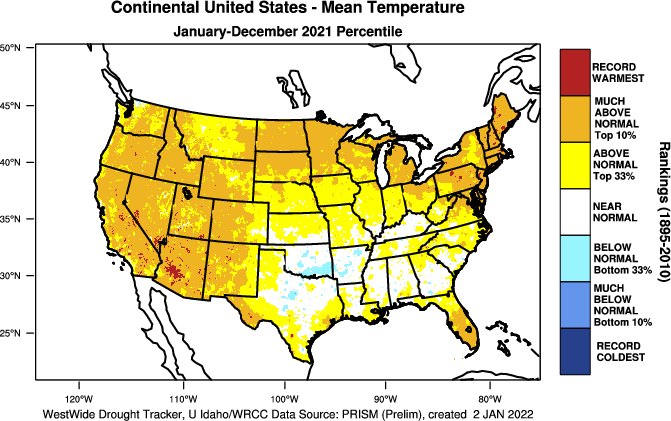 Here are the temperature rankings, which shows that some areas in the Southwest and Northeast United States saw record breaking heat.

Lastly, here are the monthly rain totals across San Diego County for 2021. 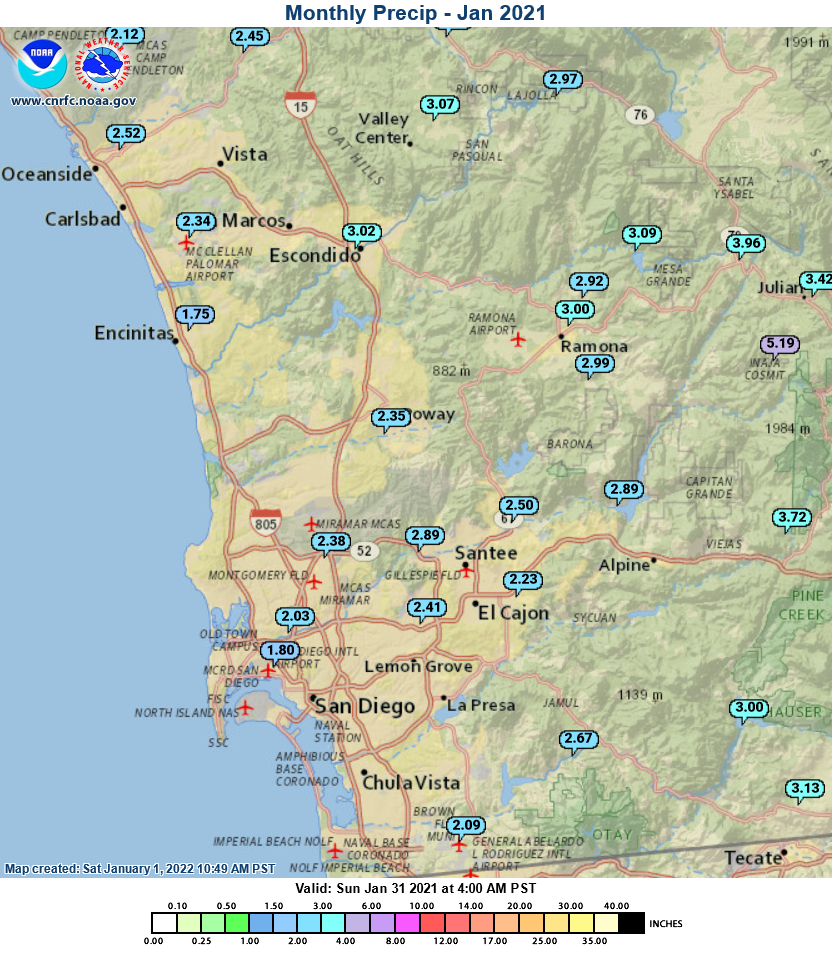 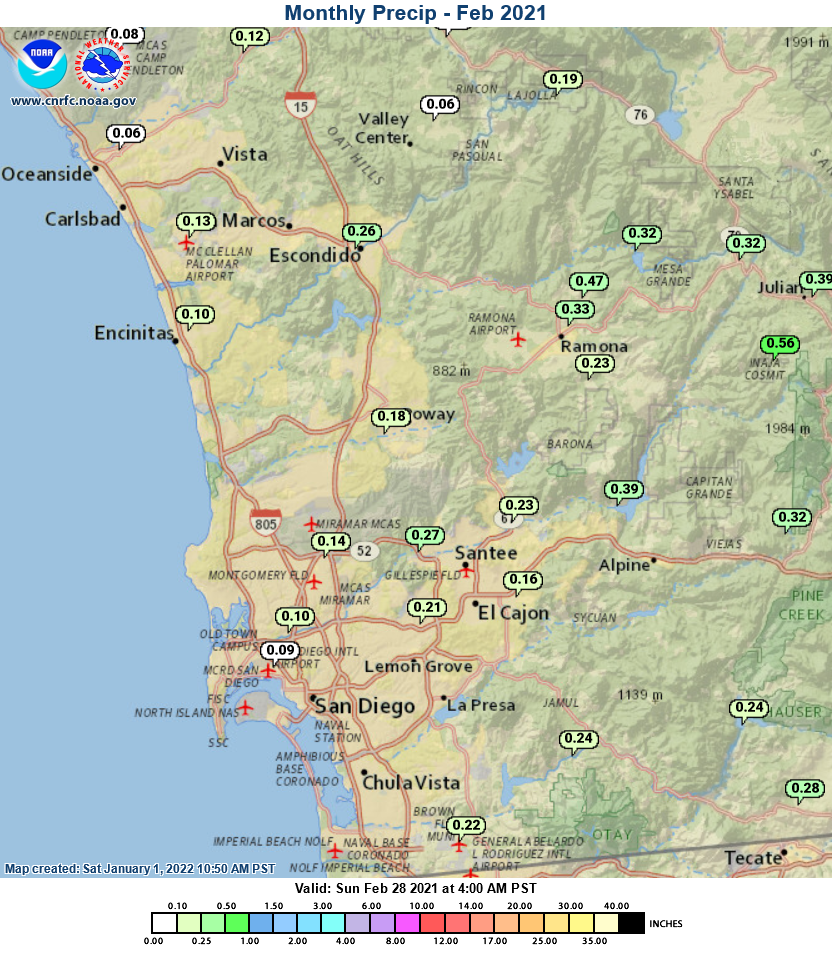 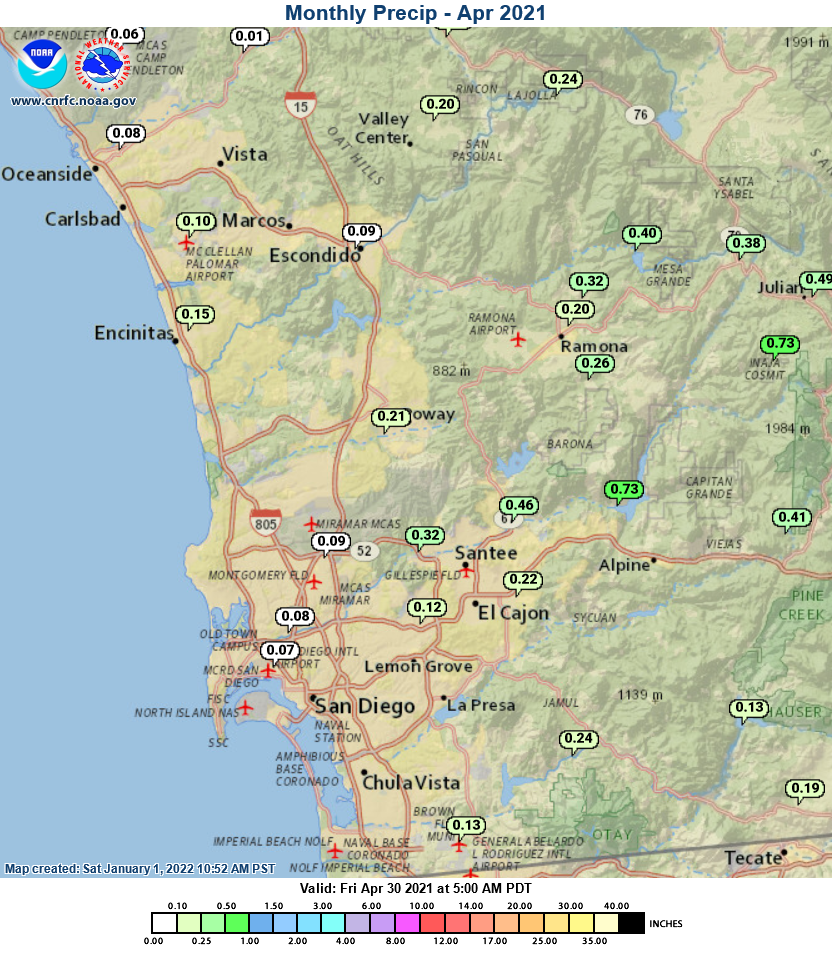 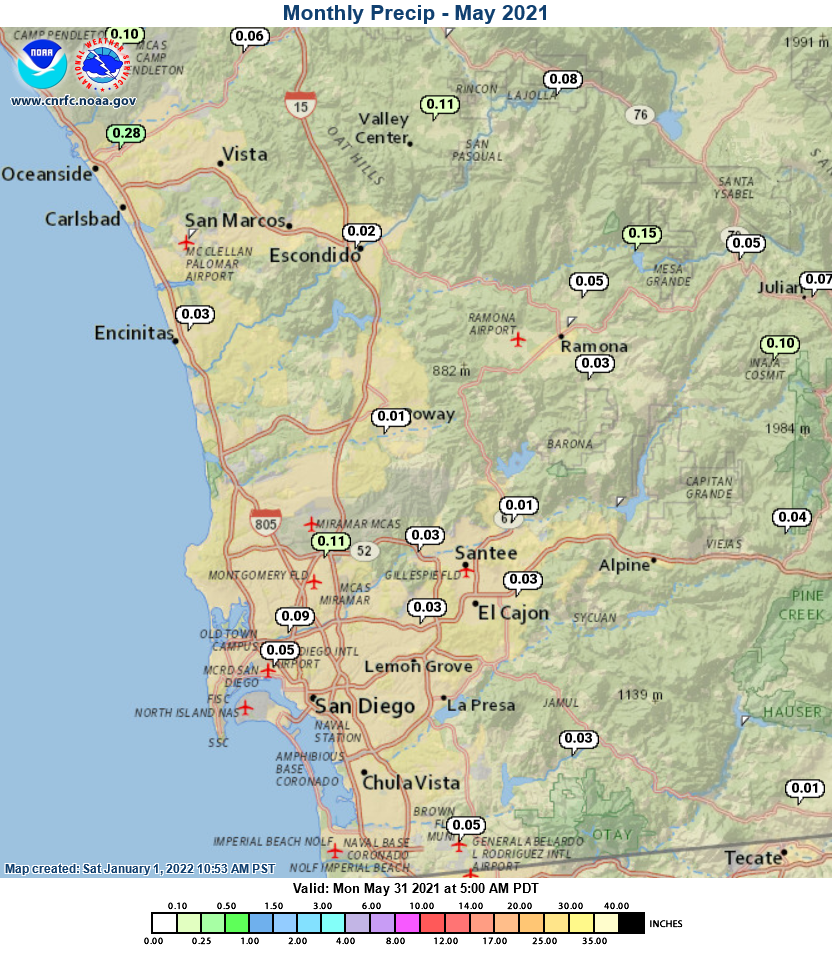 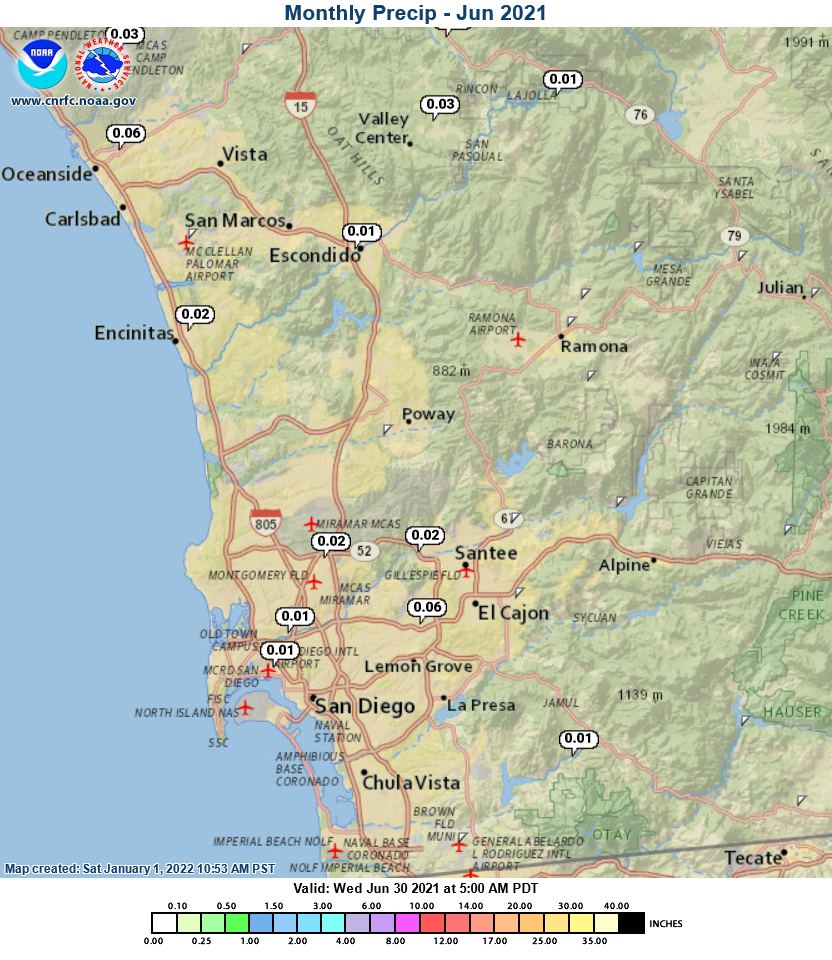 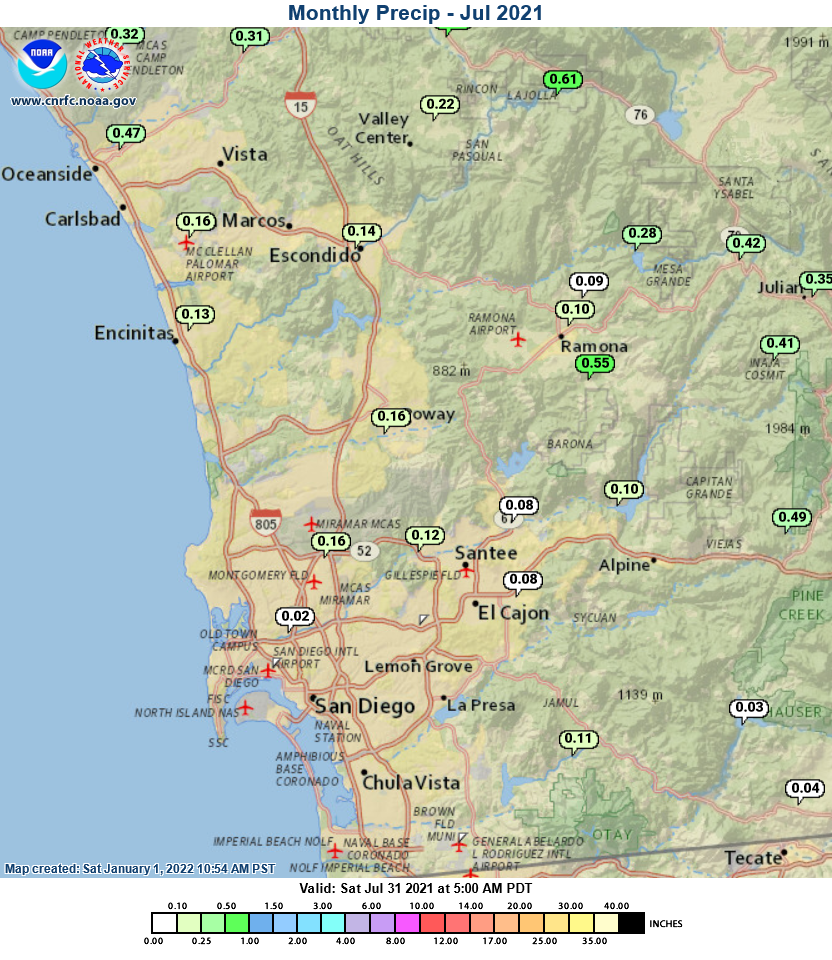 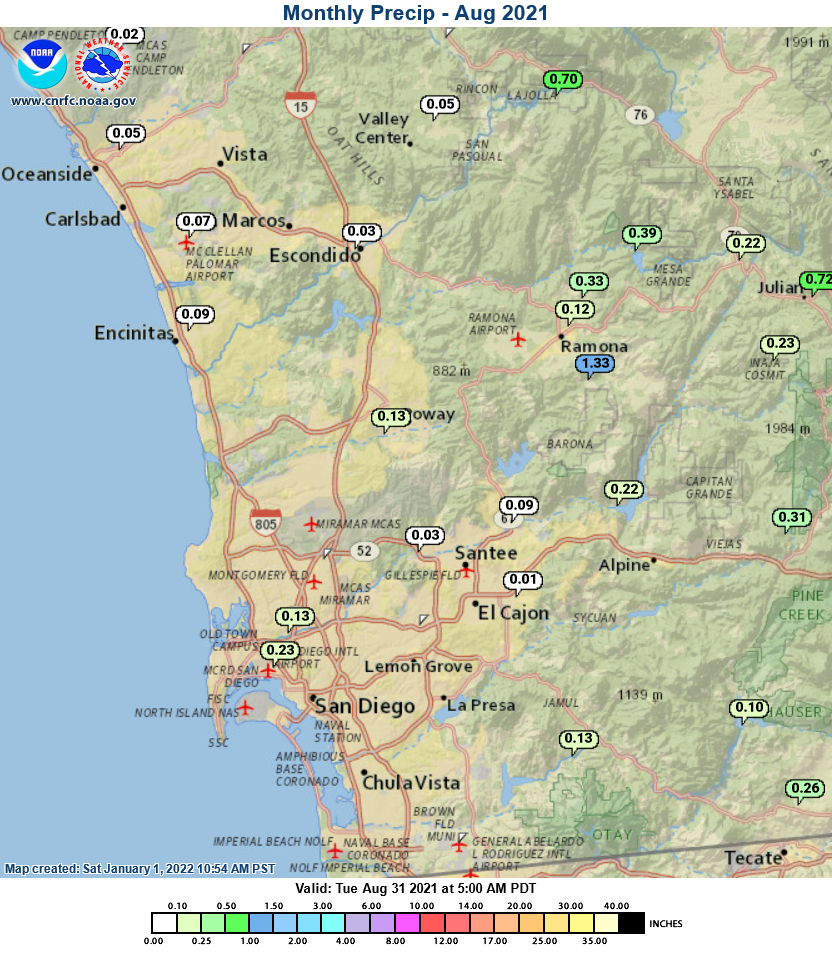 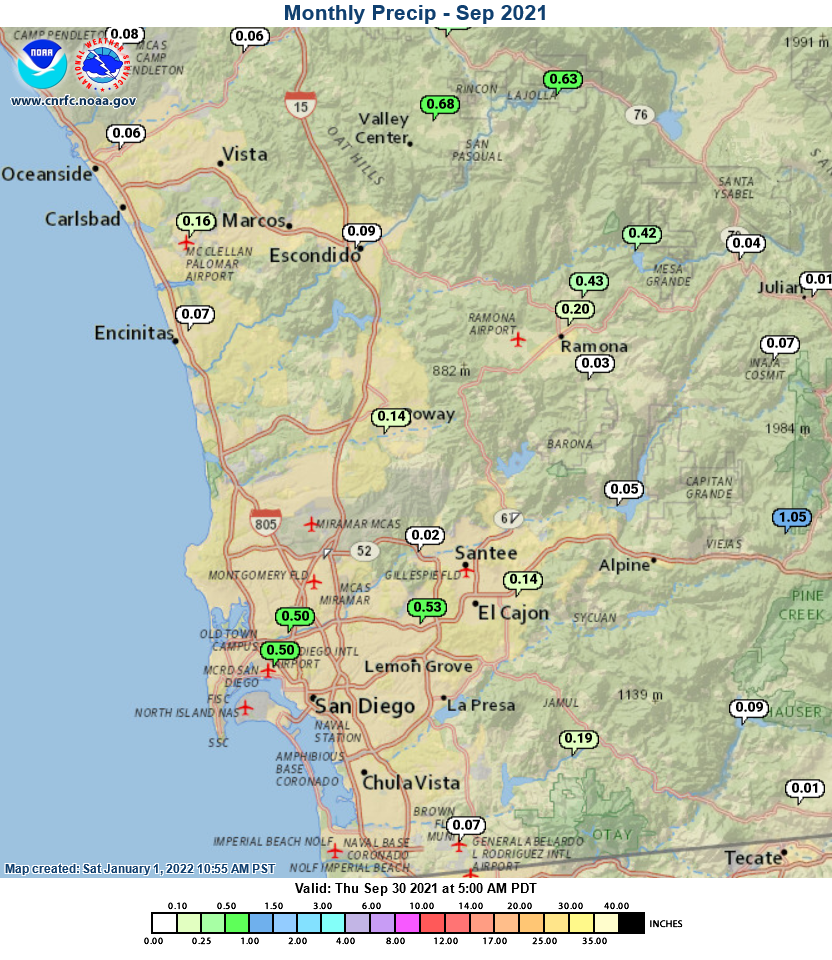 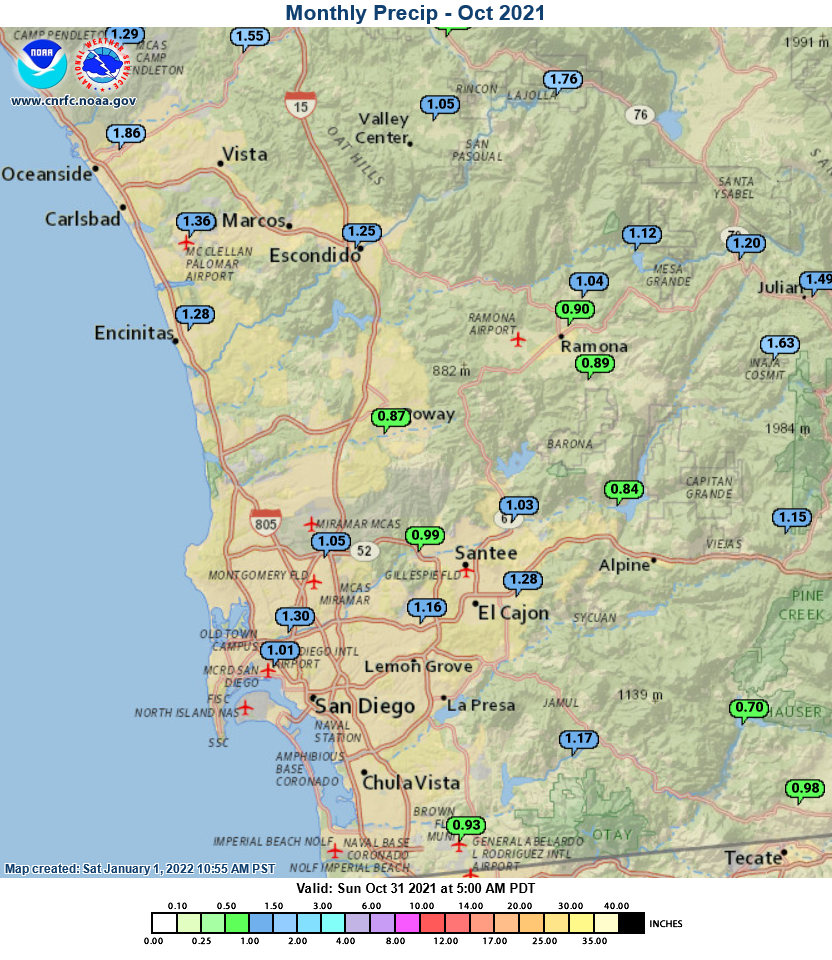 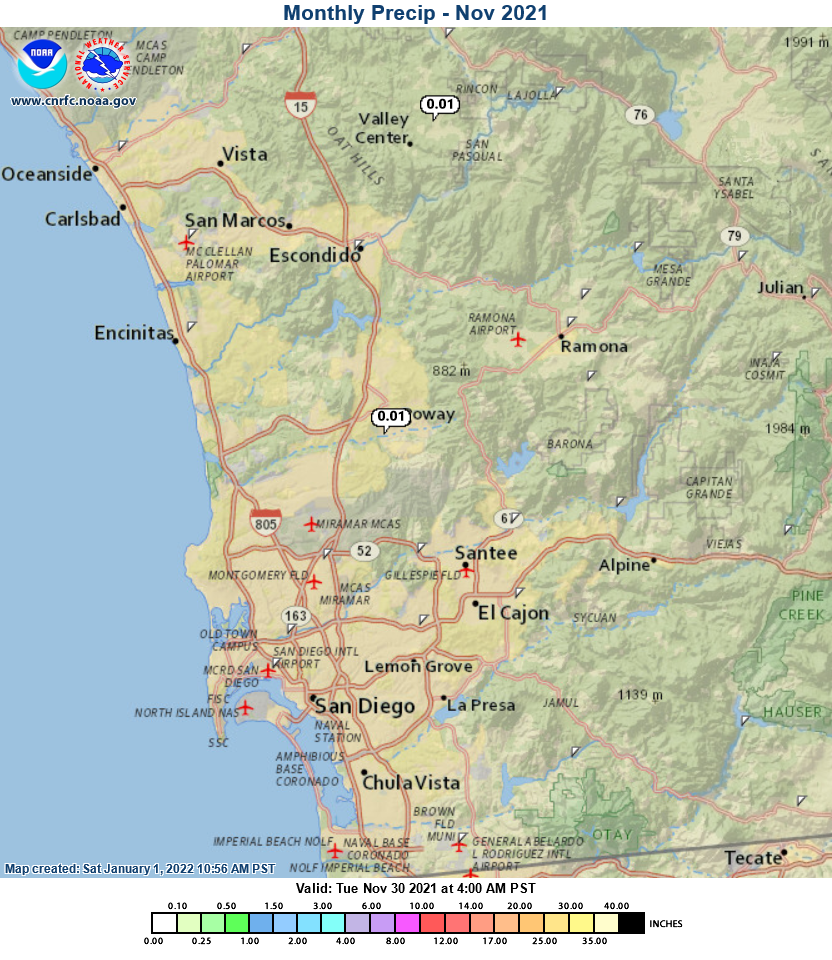 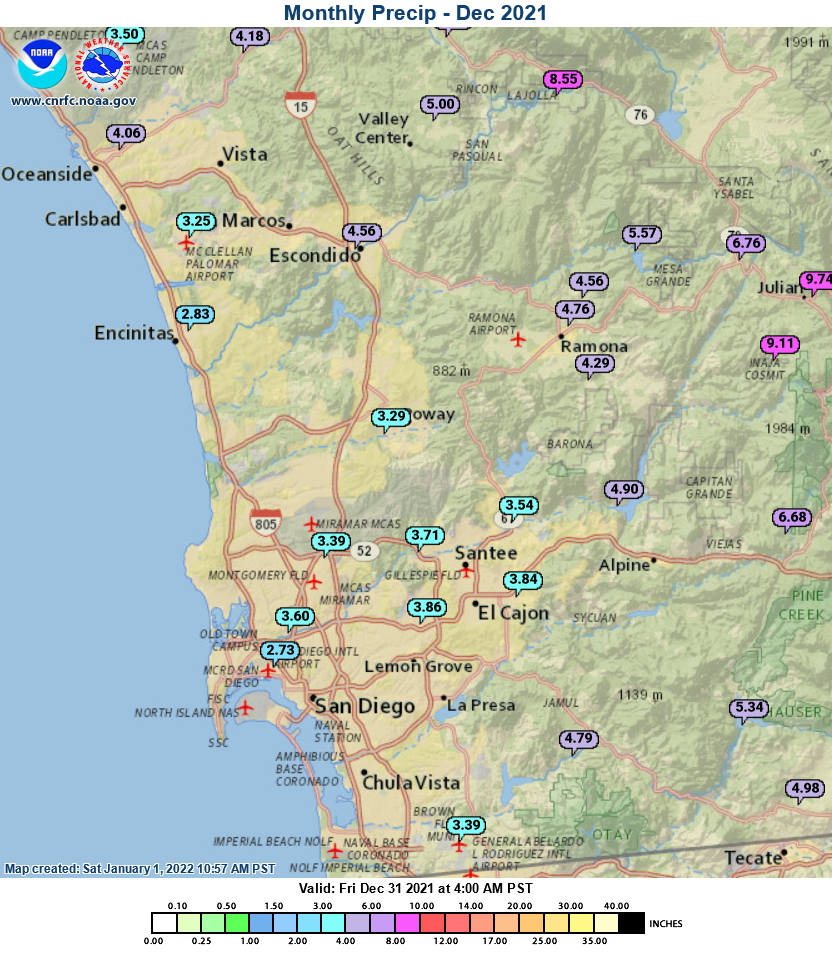 Coastal and inland rain totals were 2 to 4", mountain totals ranged from 4 to 10". This was 150 to 250% of the normal values for December. I've posted all the data below. 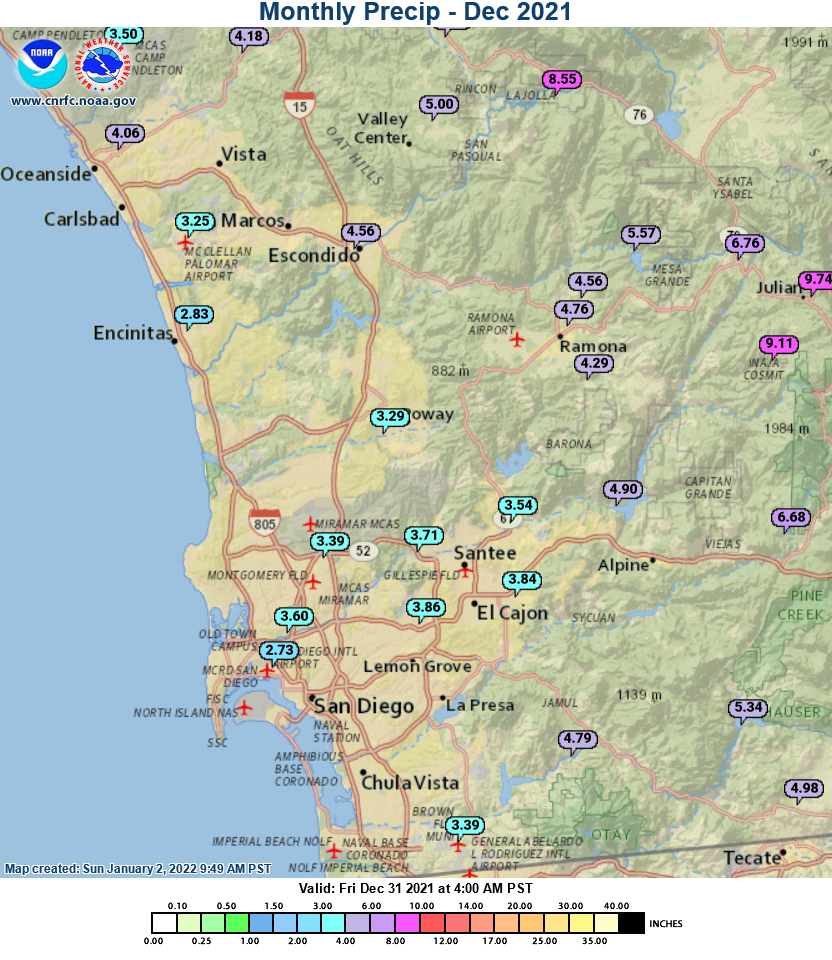 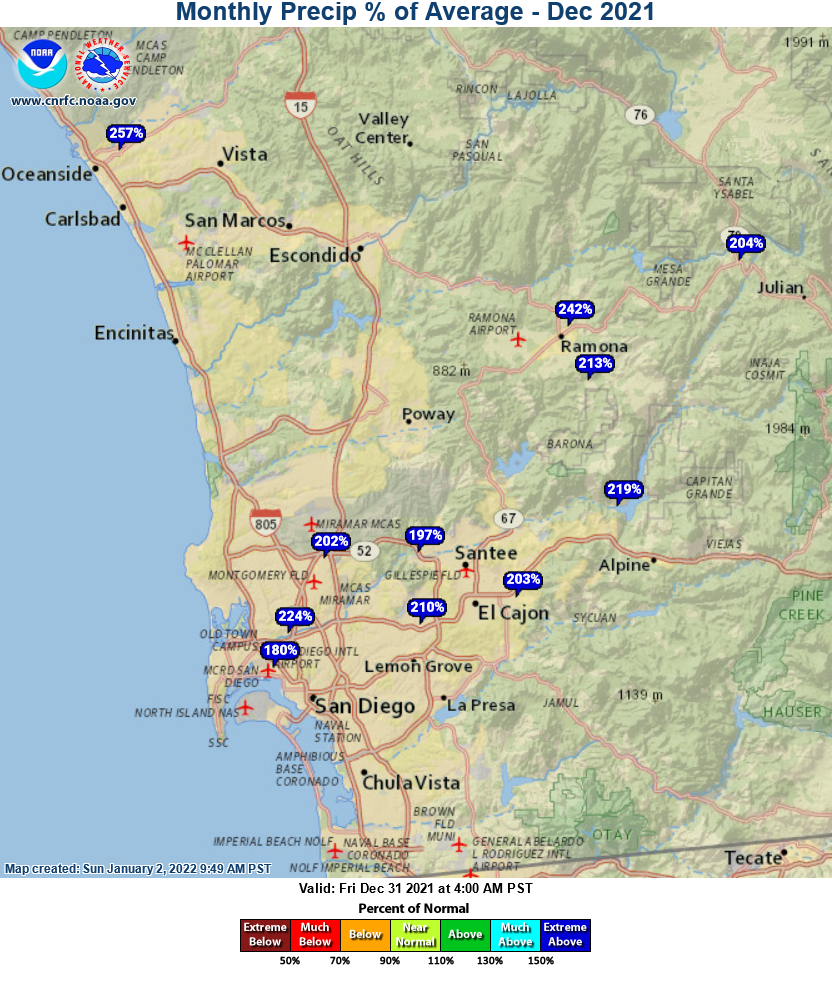