I've been keeping an eye on Katia over the past couple days. It still looks like this storm will stay out to sea, though it might get close enough to the coast to have some minor impacts. An outer rain band could clip the Outer Banks or Virginia Beach. In addition, the threat for rip currents will be high late next week. Otherwise, steering winds should keep this hurricane a few hundred miles off the coast. 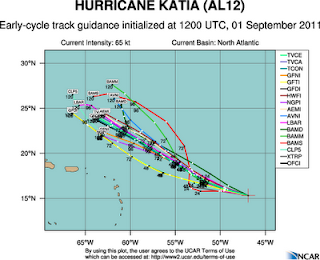 The disturbance in the Gulf (eventually Lee) remains a mystery. You can see why by looking at the forecast tracks. More than likely this storm will get swept up in the flow by late next week. Until then, it will meander around the Gulf Coast. 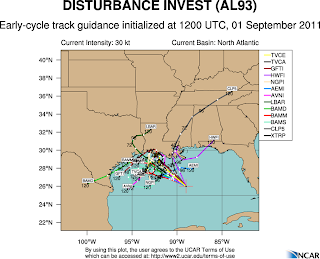 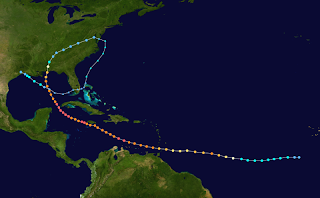 Posted by Aaron on Thursday, September 01, 2011 No comments:

Although my track for Irene was correct, the storm's impact was more severe and farther west than I expected. I thought that the harshest part of the storm would remain within 50 miles of the eye. This was not the case. Irene had weakened a lot quicker than I expected, so it expanded. It's like a twirling figure skater who slows her spin by opening up her arms. This similar expansion allowed the heavy rains and powerful winds to extend nearly 80 miles from the center of the storm.

So let's recap my forecast made last Friday afternoon:
My forecast for Richmond remains the same. I think the city will see 1 to 3" of rain west to east. Some areas on the far eastern and southeastern edge could easily pick up over 4". I want to again emphasize that this will not be a continuous rain. Bands will bring occasional downpours.Winds will remain sustained 25 to 35 mph with gusts up to 45 mph at the peak of the storm Saturday night.

Norfolk, Virginia Beach and the Eastern Shore will see hurricane-force winds (70 to 90 mph) and rain totals from 6 to 10". If you live in between Richmond and these areas, you can pretty much take an average between the two.
A tornado watch will be issued Saturday evening and night for eastern VA as Irene interacts with the land. A brief weak tornado will be possible during this time.
Here are some rain totals from the National Weather Service from west to east:
I was off by an inch or two around central Virginia, however, generally speaking the rain totals fit the forecast. In addition, there were two reports of tornadoes in eastern VA (Sand Bridge and Eastern Shore). So that part of the forecast also verified.


Winds were a different story. My forecast for southeast Virginia was generally acceptable but was terrible for central Virginia. Here are the hourly reports from Richmond International during the brunt of the storm. 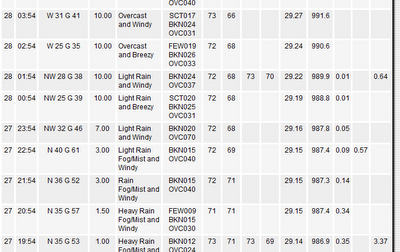 Sustained winds ranged from 25 to 40 mph with gusts 50 to 60 mph. In fact, the max gust from RIC was 71 mph. Williamsburg had the highest gust in Virginia with 76 mph (which fell within my forecast range). Along with rain-soaked ground, these winds pushed over several trees and caused hundreds of thousands of Virginia residents to lose power.


I should have changed the forecast on Friday evening. I saw that Irene had weakened and expanded. I should have looked at surface observations across North Carolina and adjusted my wind forecast accordingly.


I am saddened to hear about the injuries and fatalities from this storm. While some of them could have been prevented (for instance the surfer), it make me sick thinking about that poor kid who died. I am a forecaster who prides himself in avoiding hype. I feel that people deserve the facts without having to be stirred up into a panic. However, downplaying this storm was like playing with fire and I got burned. On the flip side, just imagine if this storm had maintained its' strength and took the path of Isabel...the damage would have been devastating. We dodged a bullet in that regard.
Posted by Aaron on Sunday, August 28, 2011 No comments: