Meteorological spring starts today, so it is time to verify my winter outlook. Obviously snow can still occur across most of the U.S. during this time of the year, but my forecast was for December through February. Last November, I typed up this summary:

San Diego - Last winter was cooler and wetter than average. This December-February should have below average temperatures and slightly above average precipitation. The southern stream will be weak, so we might not see any major rain events (exceeding 2"). Instead, I expect occasional moderate events through the winter. This could eat away at snow totals in the mountains, but colder air in the upper atmosphere could compensate a little.

Richmond - Last winter was cooler than average (cool Dec-Jan, warm in Feb) and drier than average (Dec was wet, Jan-Feb dry). Snow last year was *just* below average with a total of 10.7". I expect December-February temperatures to stay slightly above average and precipitation to hover near or slightly below average. There should be two to three cold blasts, though I don't think there will be any prolonged cold weather (over two weeks). After watching the storm track over the past couple months, I wouldn't be surprised if there will be a couple threats for a significant snow storm. Regardless, snow totals should stay near or below average at roughly 6 to 12".

Here were my forecast maps: 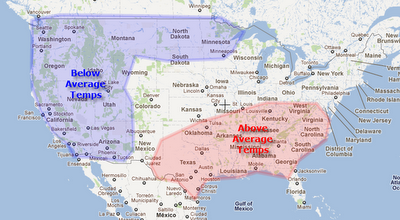 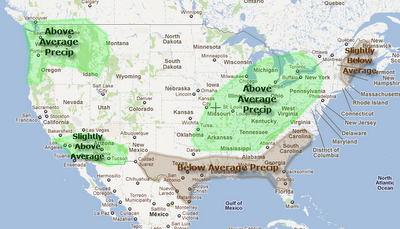 Here is what actually happened: 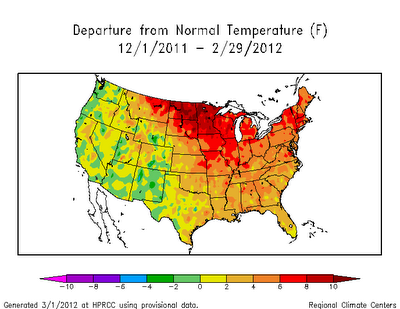 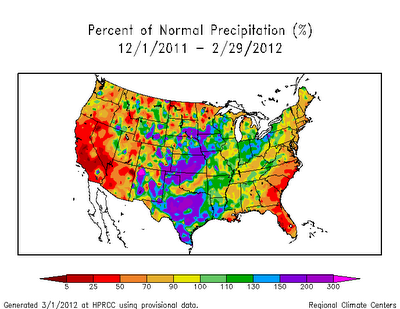 Although I'm generally happy with my temperature forecast in San Diego and California, I had a significant miss on the precip outlook. In retrospect, I should have known better considering the lack of a strong southern stream.

I had a major bust with temperatures in the Northern Plains and New England. The handwriting was on the wall, in fact, I even talked about it during my discussion on the Arctic Oscillation and NAO.

Lastly, I wish I would have extended my heavy precip area down into Texas. I drew my precip outlook two or three times. Each time I seriously considered putting Texas into the "above average" category. Instead, I stuck with persistence. Anyway, I'm glad I was wrong...Texas needed that moisture!

Scattered rain showers will overspread the area by midday tomorrow. Periods of rain will persist into Monday night and then will taper early Tuesday morning. Most of San Diego County will see a half inch or less. Monday will also be a blustery day with winds gusting up to 35 mph. Mountain winds will gust as high as 60 mph.

Snow levels will start off at 4500-5500 feet early Monday and then drop to 3500-4500 feet by Monday night. This storm system is moving fast and doesn't have much moisture, so I'm expecting 2 to 4" above 3500 feet and 3 to 6" above 4500 feet. Isolated areas could get more. Definitely good news for Bear Mountain! In addition, parts of the central Sierra will easily see over a foot of new snow.

I've posted the snow outlook from two computer forecasts. The first one is from the RPM, which I think is accurate, while the second one (NAM) is too dry. 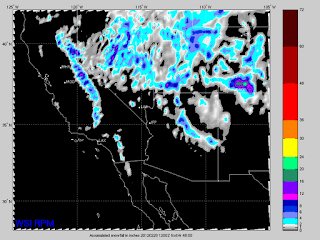 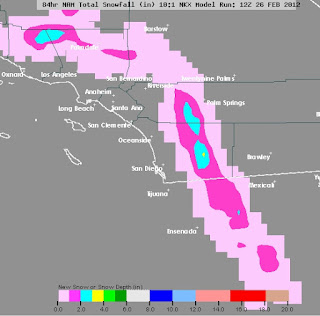