Clouds will eventually clear out Sunday and we will see warmer conditions for the start of the shortened workweek. You can spot the warm anomaly on the map below. 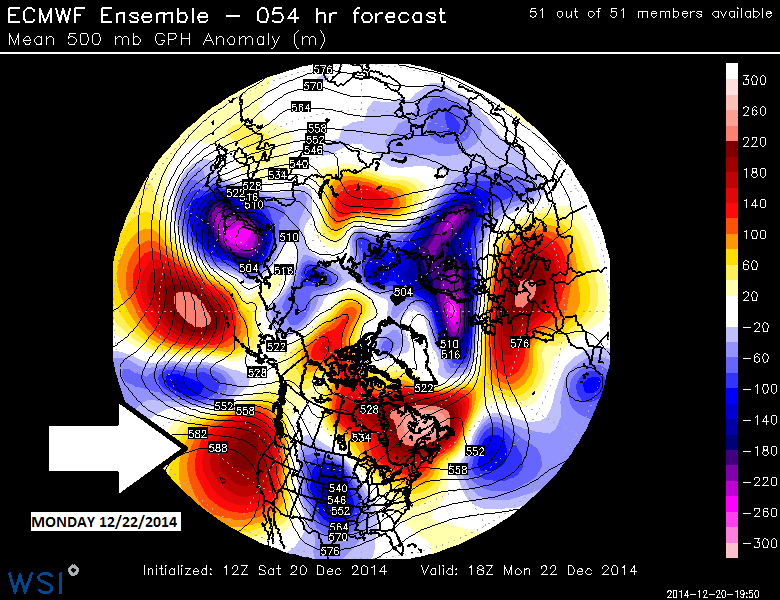 I had initially thought we would see a blast of cold air around Christmas. Although temperatures will dramatically drop for the end of next week, the core of the coldest air will miss us to the east, which you can spot on the map below. 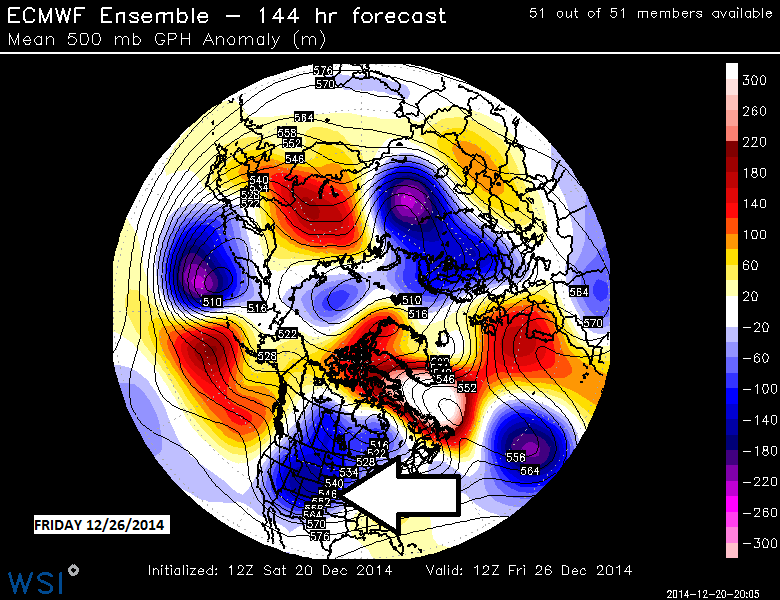 Afterwards, the forecast becomes tricky. A blocking ridge develops in the Gulf of Alaska. The placement of this ridge will determine if we will see rain or not. If it is far enough north, then we could see a system sneak underneath. However, those chances are looking slim. More than likely it will remain mostly dry in San Diego and Southern California for the next couple weeks. I'll keep you posted. 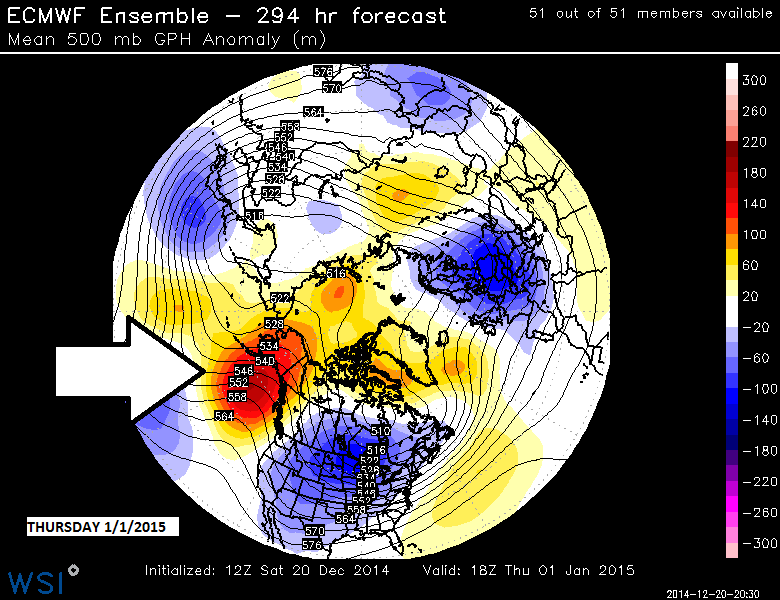 There is a slight chance for a passing shower on Thursday, though it looks like the majority of the day will be dry. Best chance for rain will be from 10 AM to 6 PM and the chance is less than 20%.

It's looking like the chance for rain on Saturday is significantly less. Definitely keep any outdoor plans.

Computer forecasts are hinting at a major cold blast for next week around Christmas. You can spot it on the charts below (850 mb temps). The first map is for tomorrow, the next one shows a big warm up next Monday, then the last map shows a dramatic drop in temps for the day after Christmas. 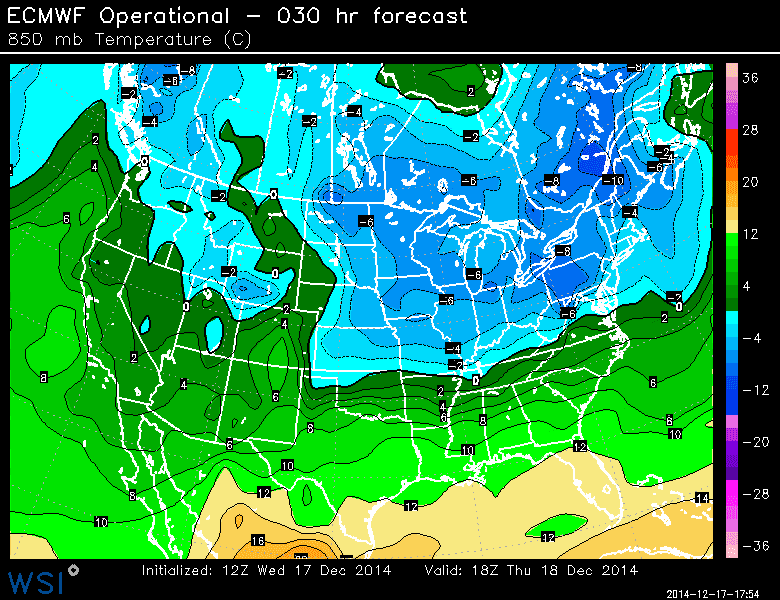 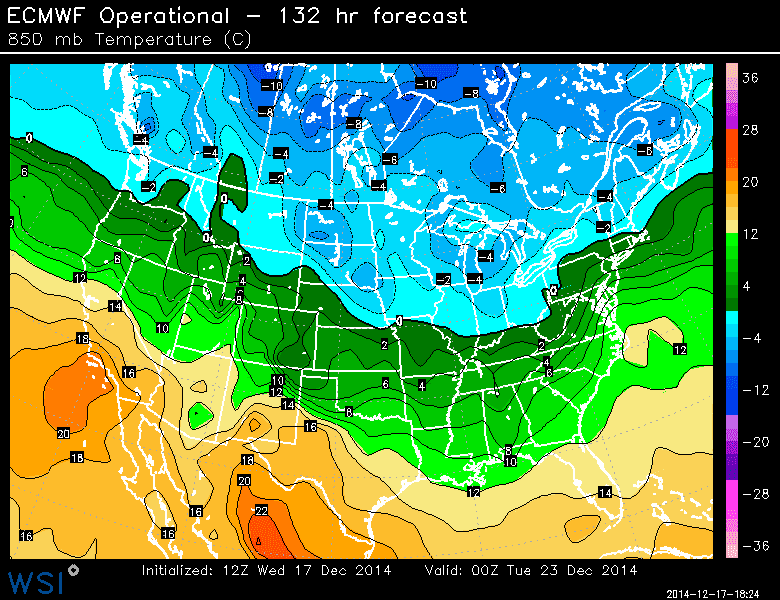 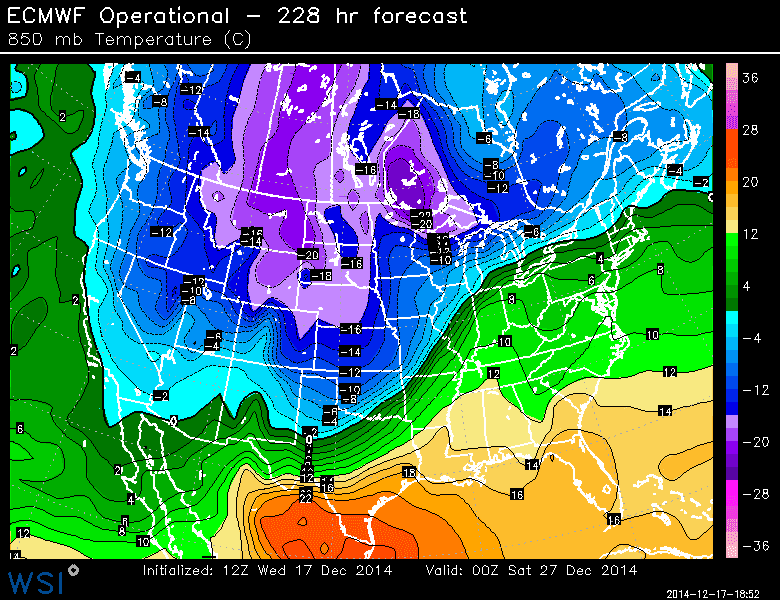 Here are the rain totals for the past couple days. 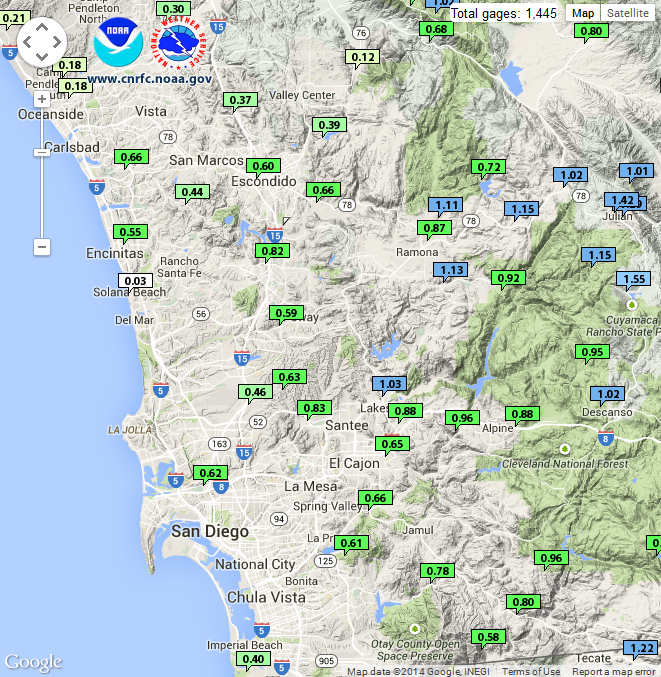 Also, here are the snow reports from the National Weather Service:

The heaviest rain is now pushing through the area. These showers should taper from 7 AM to 8 AM. An isolated shower or or quick downpour could pop up this later this afternoon and evening, however, most of the remaining day will be dry.

Another batch of showers will approach the area early Thursday (best chances 8 AM to 2 PM). This should be a quick bout with rain and the day will finish dry.

There is slight chance for a passing shower on Saturday, but it's looking like a mainly dry weekend.

Here are the rain totals as of 6 AM: 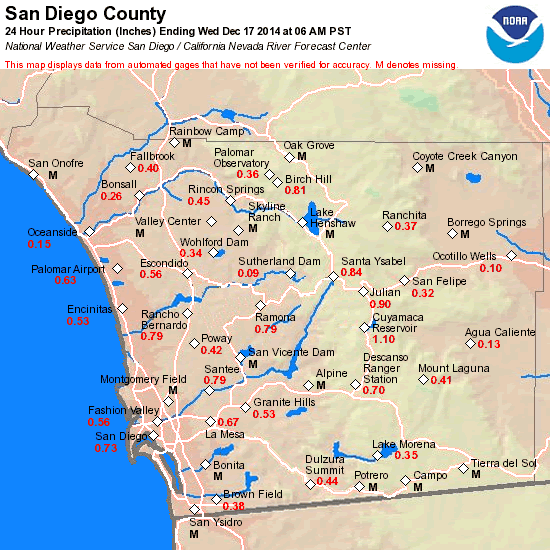 Heaviest showers still remain off the coast. They should arrive 10 AM to 1 PM.

More rain is coming soon! There are no major changes to my previous forecast. Some drizzle could develop later tonight, then showers will arrive tomorrow morning. A quick downpour and even some thunder will also be possible. Spotty showers will persist on-and-off for the rest of the day.

As expected, the second storm system will be stronger and bring a chance for higher rain totals. Showers and isolated thunderstorms will be possible Tuesday night into early Wednesday morning. Periodic showers will then linger into Wednesday night. Most areas will be dry by Thursday morning.

It will be a tough call on rain amounts because of the potential for thunderstorms. Some areas could get drenched while other areas will only see moderate showers. Regardless, I think it is safe to say that we will see storm totals of around 0.5" to 1.0" with isolated higher amounts, especially in the mountains. I've posted the computer forecast below (NAM), which I think is reasonable. 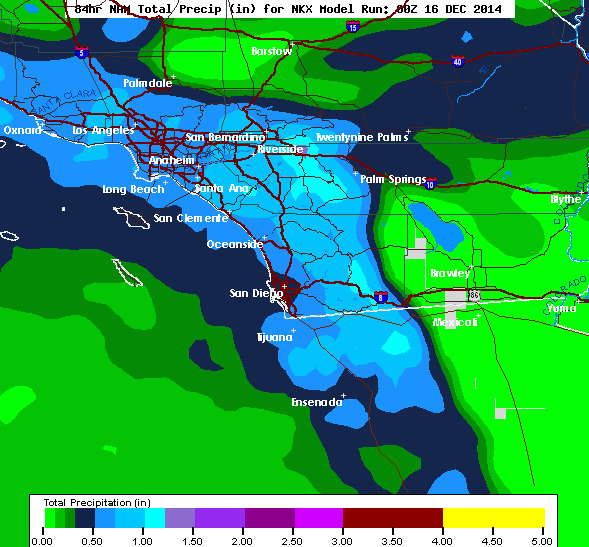 More rain is headed this way for the upcoming workweek. This storm is going to come at us in two phases. I've marked them on the water vapor imagery and the ECMWF 500 mb charts below. 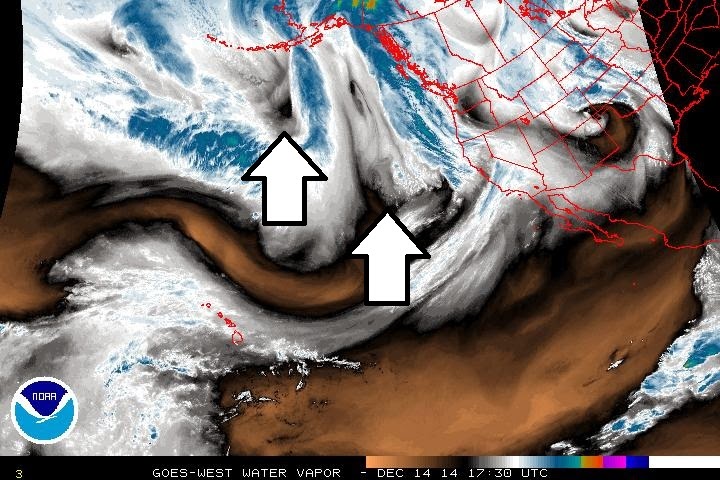 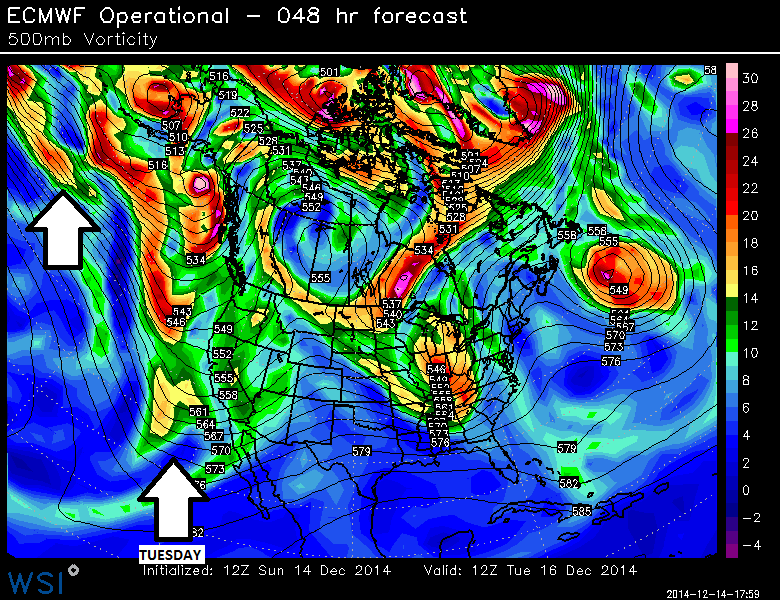 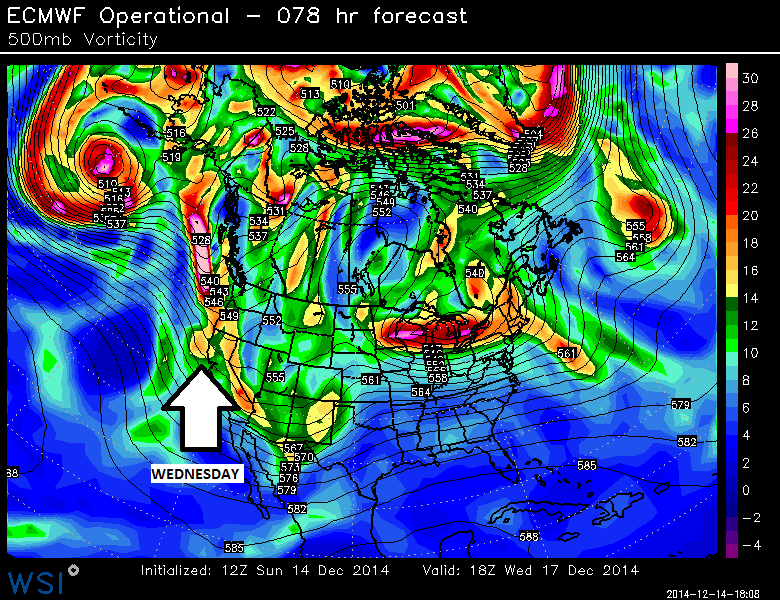 The initial piece of energy, which is weaker, will bring widely scattered showers Monday night into Tuesday. The stronger upper low will swing under the belly of the system in the Gulf Of Alaska and then approach the our area Tuesday night into early Wednesday. This will bring rain and occasional downpours. Isolated thunderstorms will also be possible Wednesday as colder air aloft arrives in the region.

I'll be the first to admit that storms like this (broken in pieces) can be difficult to forecast. The amount of rain we receive is largely dependent on the strength of the storm as is passes. This second wave has me concerned because it will be intensifying as it passes overhead, giving us a wider range of possibilities. This is compounded by the threat of thunderstorms, which means that some people might see torrential rain, while others might not see much at all.

At this point, I think the computer forecasts are being a tad too aggressive, especially GFS, which has been terrible with storm placement and strength lately. Below are the NAM projected rain totals through Wednesday evening. You can see that we could potentially get about an inch of rain. Also notice the heavier amounts for Northern California. 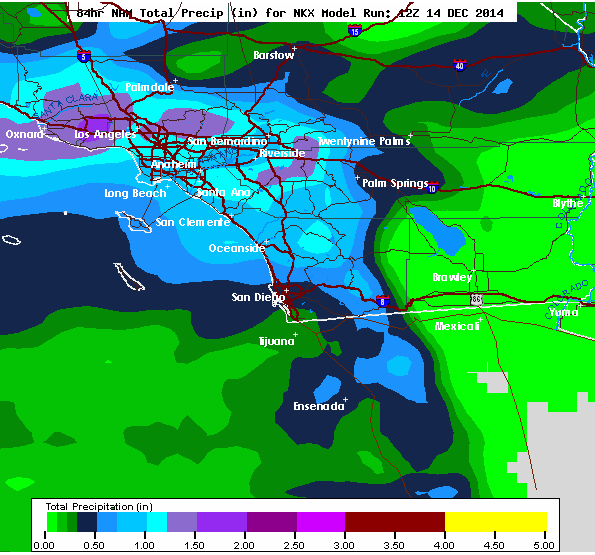 Yet another system could pass the area on Saturday. I'll focus on that system later in the week. Afterwards, it looks like the start of next week (Sun-Mon 12/21-12/24) will be mild and dry for Southern California as an upper level ridge nudges into the West Coast (marked on the map below). 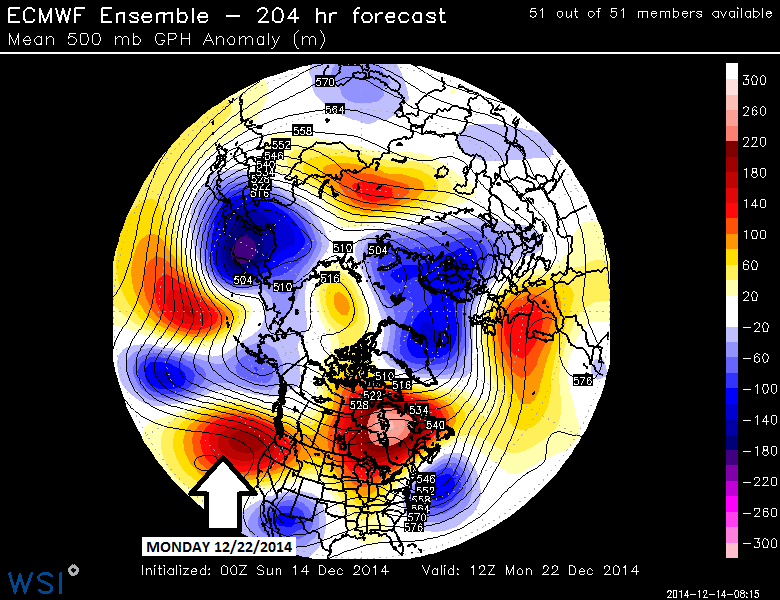